While I didn't work on the base design of the poster, I handled everything below the text about prizes and food. There was some collaboration, but the vast majority of the calls to action (All but the, "Do you wanna Smash bro?") were conceptualized and written by me, and all of the artwork and text was placed and formatted by me.

The campaign was quite successful, allowing us to host our largest tournament up to that point. In 2019, we saw 233% as many signees as we saw in the 2018 tournament, many of them from outside the regular members of the club, something rather rare in previous years. In the actual tournament, we saw 185% of the number of 2018 participants, though the decrease wasn't related to the campaign so much as it was to school work and other obligations.

When compared to the following year, when I was off the board and hadn't assisted with any advertising efforts, the event only saw a 19% increase in particpants compared to my year's 85% increase. I don't have access to the number of signees, however, but I know that there were fewer no-shows in 2020 than there were in 2019, so it's safe to assume that total number of signees was pretty close to the total number of participants.

My senior thesis, while intended to have had two studies, was only able to have one. However, I was still able to make a poster in regards to it, and acquire participants within a rather tight deadline of 4 days. I was successfully able to reach my goal of 12 people, and gather 11 participants (one had a last minute conflict), thus only 9 were entered into the study due to a need to keep groupings evenly-sized.

This was done around mid-term season, shortly before Spring Break, which never quite ended due to COVID-19, so finding 12 people who knew nothing about the goals of my final project was difficult, but the posters worked well enough to get the majority of the poster-initiated responses immediately after they went up around Allegheny College's Henderson Campus Center. 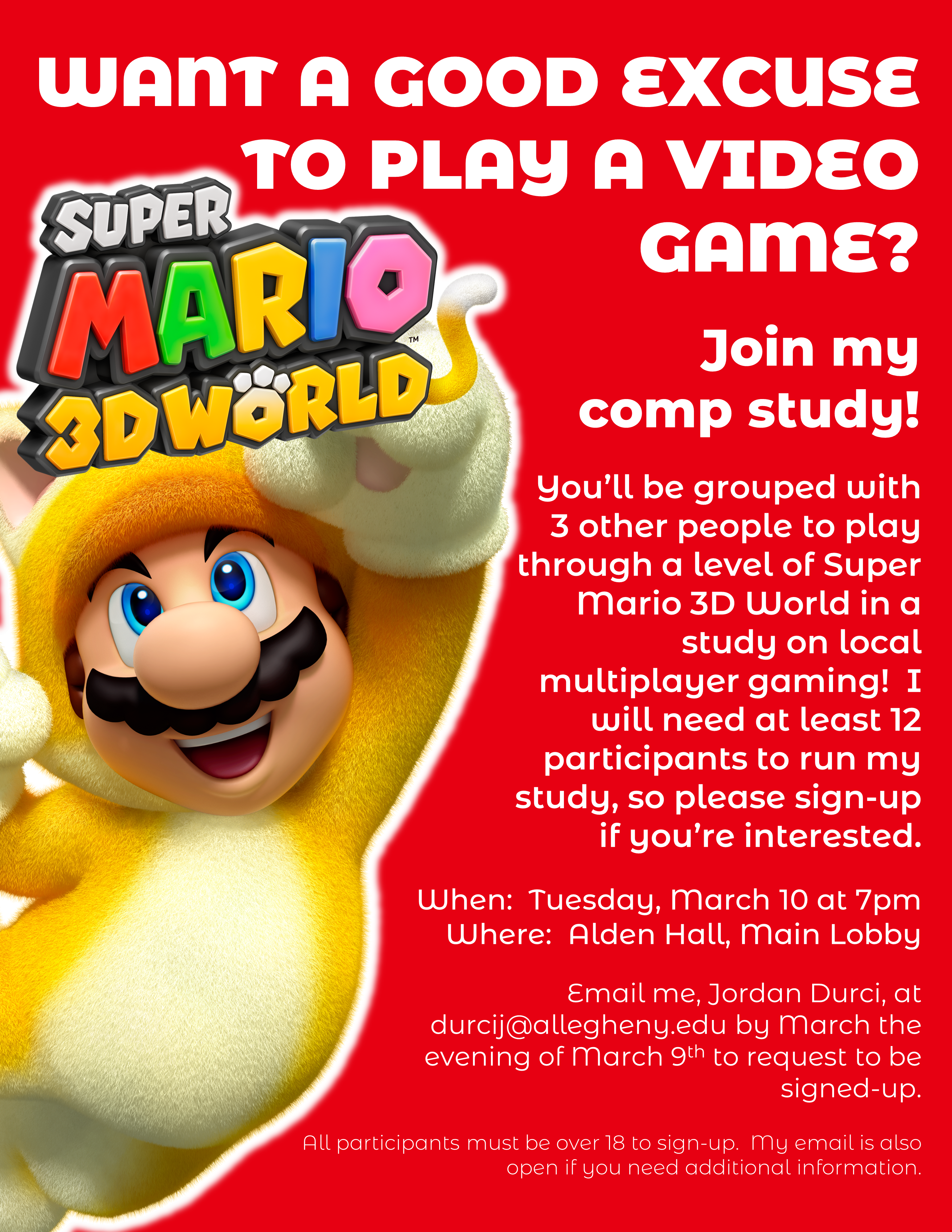 In my final semester at Allegheny, I continued to serve as the president of Comics Club until we could organize a vote. During that time, I worked to create 2 separate promotional campaigns for the club.

The first campaign was a new banner poster. This poster was printed out at massive scale and hung from a balcony in the Henderson Campus Center. The poster features a logo conceptualized by a club member, and created by me, as well as functioning QR codes that link to the club's website and the "Geek Life" Discord server.

Fall 2020, was slow for growth, but we had a few new freshman reach out upon seeing the poster once it went up, which is honestly more than previous posters have led to. 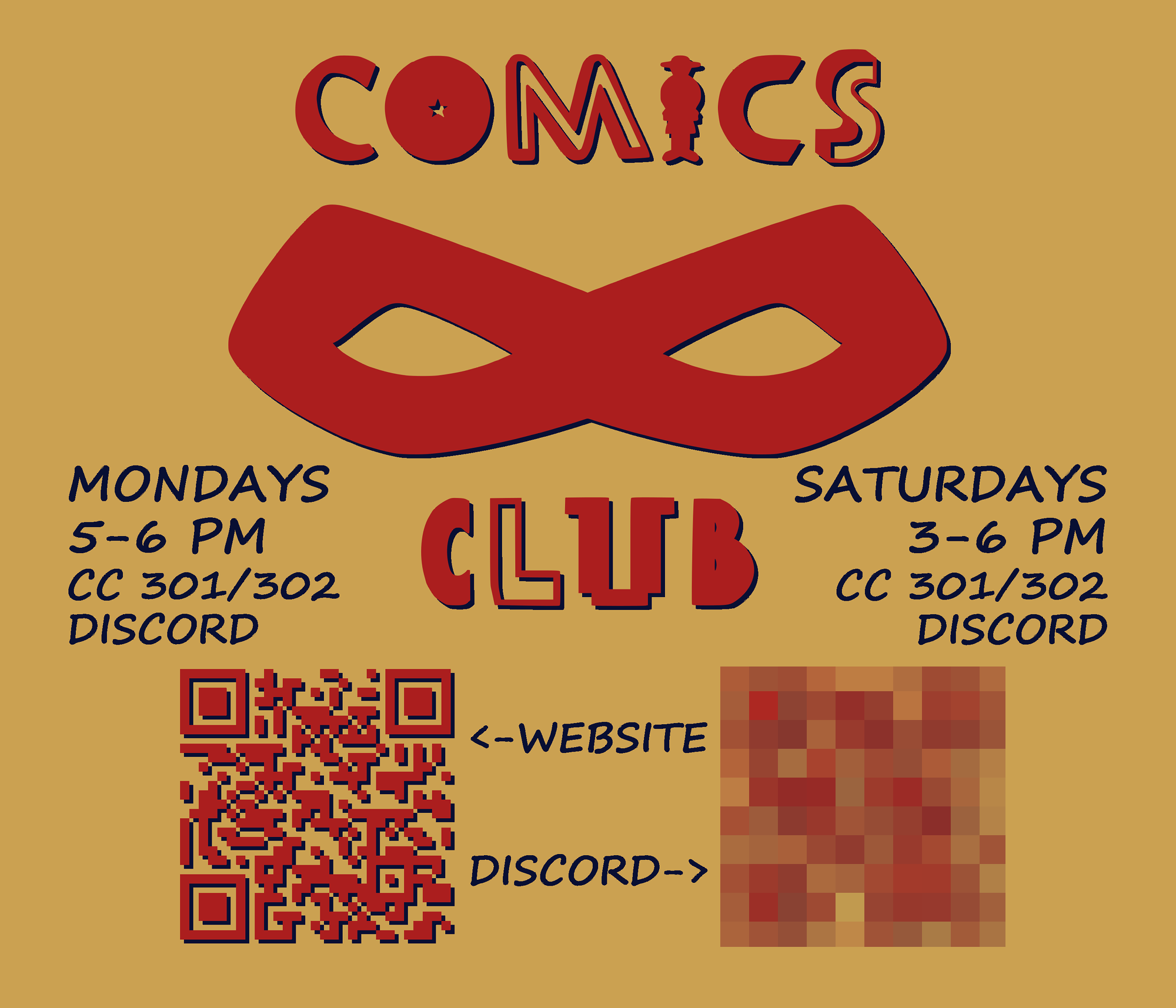 The second campaign was for our Art-tober event, a series of prompts to base daily artwork on for the month of October that was inspired by a similar event with, suffice it to say, stricter legal protections and prohibitions against the use of art from the event for things outside of the event. This list was posted on the Comics Club website, as well as placed around all corners of the Henderson Campus Center in the form of cutout squares of roughly 4 inches in size.

As this event's reach was not really traceable, I cannot honestly say how well the small squares scattered around the Campus Center did to get people interested in Art-tober, but I do know that some were taken from their locations around the art wing, as I was working there for a work study.

That said, as someone capable of critically looking at past actions, I can say without a doubt that putting some call to action to make the artwork traceable (such as the inclusion of a hashtag, or direct mentions of social media to post on) would have been ideal for ensuring our ability to track the reach of the campaign. You live and you learn, I suppose. 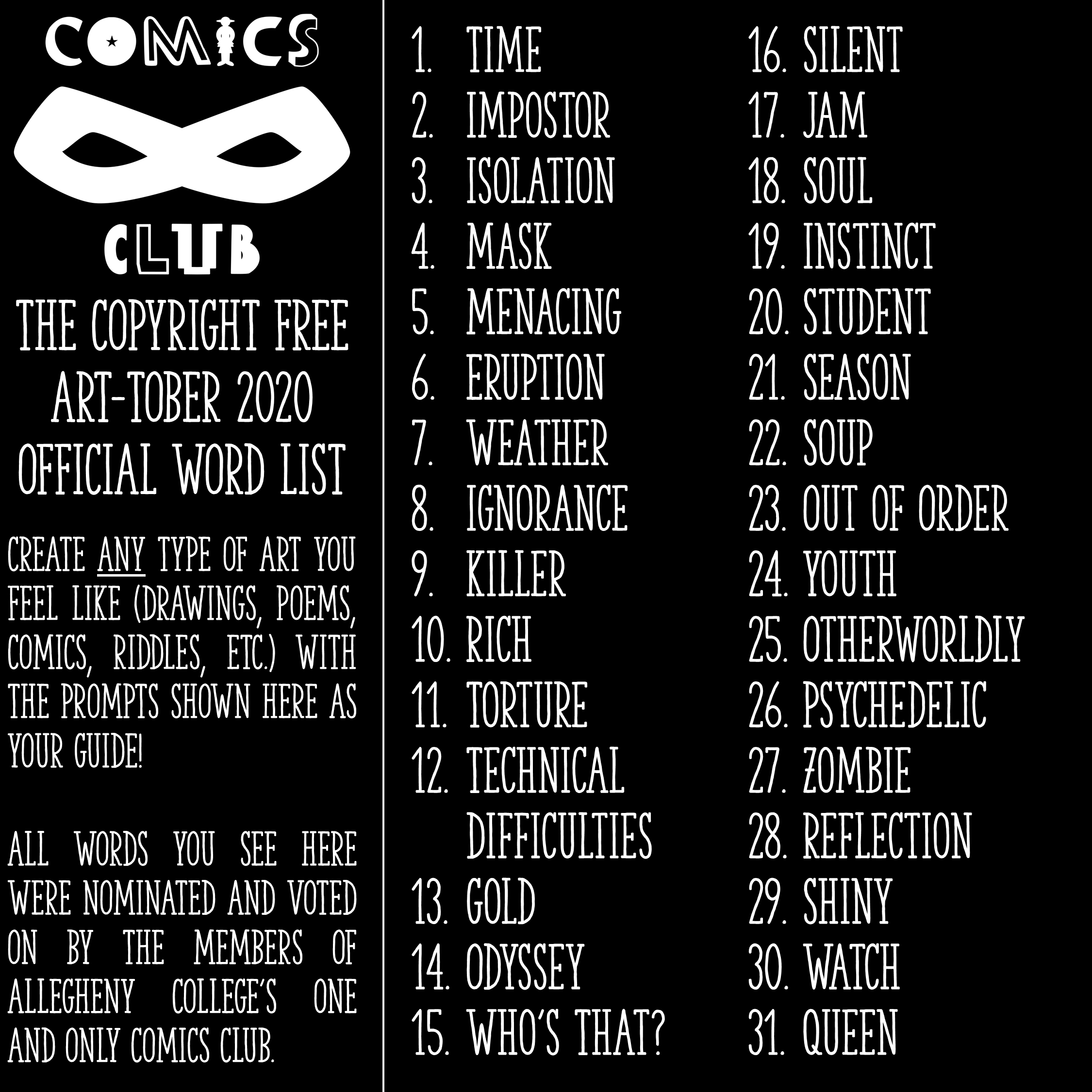